The power of love over bureaucracy

Unwrapping Red Tape to Find the Gift of Family 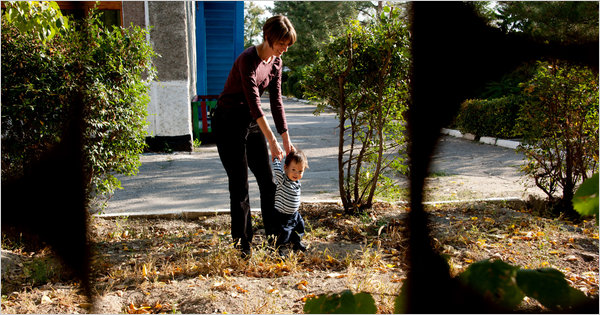 For months, Rebecca Compton went daily to an orphanage in Taraz, Kazakhstan, to visit Noah.

TARAZ, Kazakhstan — He was first placed into their arms nearly a year ago, an underweight 9-month-old baby in a gray sweatshirt. They were at an orphanage behind a crumbling housing project here in Central Asia, unimaginably far from their home in suburban Philadelphia, but immediately, they knew that they did not want to let him go.

They decided to call him Noah.

"He seems like the right little guy for us," Rebecca Compton, a college professor, wrote as she and her husband, Jeremy Meyer, a labor lawyer, began what they thought would be a standard adoption process.

But these days in Kazakhstan, Russia and other former Soviet republics, adoptions are often far from standard, especially in light of the highly publicized — and deeply embarrassing — return of a 7-year-old Russian boy to Moscow in April by his adoptive American mother.

Ms. Compton and Mr. Meyer assumed they would soon be flying back to the United States with Noah. Then the delays mounted. Kazakh officials refused to sign off on the adoption.

Yet, Ms. Compton and Mr. Meyer would not give up.

They took leaves from their jobs, remaining in Kazakhstan for months on end while engaging in a bewildering fight with the Kazakh bureaucracy. It was not until last week, after setting aside their lives to pursue a child whom they now deeply loved, that they finally learned whether they could adopt him — whether this Thanksgiving would be a day of joy or despair.

"This is one of the only times when I have ever had this experience of feeling so helpless about something that I care so much about," Ms. Compton said. The obstacles that Ms. Compton and Mr. Meyer have faced reflect the rising complexity of foreign adoptions in the former Soviet Union, which since Communism's fall two decades ago has been a popular destination for prospective parents. As these countries become more stable, they are growing increasingly resistant to the idea of sending future generations abroad.

But they still maintain large orphanage systems, so a debate periodically flares over what is in the best interests of the children. The authorities would like local parents to adopt, but there are not enough in countries like Kazakhstan and Russia.

The issue is not necessarily poor conditions in orphanages. The one in Taraz is clean and well run, and the children seem happy. But experts say children are more likely to thrive in a good family.

Ms. Compton has spent much of the last year in Taraz, a city on the old Silk Road where English is rarely heard and boiled horse meat is typical fare. For months, she went daily to the orphanage to see Noah.

Born premature, he had lagged developmentally, but with the constant attention he has started to catch up, turning into a spirited toddler before the Americans' eyes. On a recent visit to the orphanage, he giggled and squirmed while Ms. Compton read him a book with purple dinosaurs and blue whales, as if they were any mother and child.

"When I am here, I have no doubt about what I am doing," she said. "As soon I see him, I don't think about the legal situation, or how long I have been in Taraz. I just want to hold him."

But visiting hours soon ended. She had to leave the orphanage, and he stayed behind.

On many nights in recent months, she has retreated to her hotel room and not known whether to scream or cry or bang her head against the wall in frustration. She said she once dreamed that she was hugging Noah, but then he disappeared, though she could still feel his touch. Then she located him nearby, "looking up at me with his dark searching eyes," she recalled, but he vanished again.

In January, soon after they began the adoption process, Casey Johnson, the daughter of Woody Johnson, the owner of the New York Jets, died. Ms. Johnson, who had adopted a baby from Taraz in 2007, had led a troubled life, and her death raised questions in Kazakhstan about whether the adoption should have been allowed. Local officials became exceedingly cautious, and slowed down several adoptions.

Then in April, the 7-year-old boy was returned to Moscow on his own by his American mother, and the Kremlin demanded new adoption safeguards from the United States. That had a ripple effect across the countries of the former Soviet Union.

In May, a court rejected Ms. Compton's and Mr. Meyer's petition to adopt Noah, contending that the orphanage had not done enough to determine whether Kazakhs might want him. They appealed.

Ms. Compton, 40, who is the chairwoman of the psychology department at Haverford College in Pennsylvania, and Mr. Meyer, 40, had little ability to deal with the Kazakh legal system, which often seemed highly dysfunctional. They do not know Kazakh or Russian, the languages here, and were dependent on interpreters, consultants and lawyers.

"We are never quite sure what is going on," Mr. Meyer, who had to return to Pennsylvania over the summer for work, said last month. "We are in the dark about the most important thing in our life."

Raisa Sher, the federal children's ombudsman in Kazakhstan, said in an interview that Taraz officials were applying the law correctly. She said Kazakhstan was supporting efforts to keep babies in the country, so officials had to ensure that foreign adoptions were a last resort.

"It is very sad when a country cannot provide for its own children," she said. "We consider these foreign adoptions only a temporary measure."

Kazakh officials even suggested that Ms. Compton and Mr. Meyer seek another baby, as if Noah could be exchanged for someone else. They cringed at the thought that a child who had been given up by one set of parents would be abandoned by another.

But by September, there seemed to be an opening. With the government under intense lobbying by Ms. Compton and Mr. Meyer and their supporters, a local court indicated that it would reconsider their case if it could be shown that no Kazakhs wanted to adopt Noah.

The orphanage presented evidence. Then there were more sleepless nights while they waited in Taraz for the decision. This month, the court preliminarily endorsed the adoption. "We won. We won!!" they wrote on their private blog.

Last week, they received final approval, and on Friday they walked out of the orphanage with a new, by now 20-month-old member of their family. They are hopeful that other foreigners who have also had Taraz adoptions blocked will obtain similar relief.

Ms. Compton and Mr. Meyer have to remain in Kazakhstan for a few more weeks, but they said they were fine celebrating Thanksgiving in a foreign land, given how much they had to be thankful for.

They noted that the holiday reminded them of Noah's Kazakh name, Aldanysh. Loosely translated, it means "survivor."