re adoption via nyt 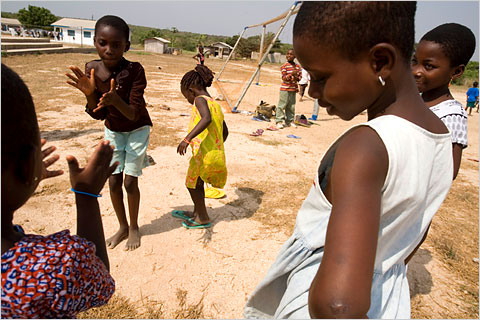 (Photo: Olivier Asselin for The New York Times)Children from an orphanage in Gomoa Fetteh, Ghana.

In our discussion about international adoptions, we received numerous comments from readers who shared their stories on the choices they made and the difficulties they’ve encountered. Below are excerpts of their comments.

I am a Korean-American adoptee. My adoptive family is Caucasian. I am grateful that my parents are sane. You may be surprised to learn how many people adopt who are in fact verbally abusive, physically abusive, neglectful…

Would you be surprised to hear that, now that I am an adult, if I go out for dinner alone with my father, people give us disgusted looks? They think we’re dating.

Despite my experience with loving parents, the experience of adoption has left me with a conflicted sense of identity and a feeling of continual guilt.

I have no ties to my Korean heritage. I look Korean on the outside, but am a white American on the inside. I am continually treated as a foreigner in the States because of my outward appearance. I currently live in Korea. I am treated as a foreigner here (which I am) because I can’t speak Korean. I feel like an outsider in both the U.S. and in Korea.

There are so many misconceptions about adoption … with words like “lucky,” “save,” “unfortunate” being tossed around. Can you imagine growing up and continually hearing statements like, “You should be grateful we saved your from your unfortunate life overseas. You’ll have a much better life here.” Whether true or not, the emotional impact this has on a child needs to be carefully considered.

My Child and I Needed Each Other

I adopted my daughter from Peru in 1990. Was she an orphan? Her birth mother signed papers relinquishing her rights, and the father did not even wish to acknowledge that the child was his. Extended family? Maybe, but none who could afford to take in another child. Why did I adopt from Peru? Because I wanted to have a child of my own and I could not give birth. My daughter is my child and I love her with all my heart and soul. She plans on doing a year of international study in Peru as she wishes to be a Spanish teacher. What chance would she, the birth child of a Quechua farm worker, have had to graduate from grade school, let alone go to college? The fact is I am not rich nor famous but I did adopt a child who needed me just as I needed her.

Leave the Agenda Behind

I am the mother of two children who were adopted internationally. I did not adopt them to save them. I adopted them because I wanted to be a mother. Both were in orphanages; neither were orphans. One was tossed in the trash when he was 4 months old. The other was left for days on her own at 6 months old. They were placed in orphanages where they languished and grew slowly and were never visited by families. Yes, they have families. They were offered to others in their country for adoption. No one wanted them.

When they came home to me, they were not fat-cheeked cherubs. They were sick, developmentally delayed and unused to people touching them. Now, they are healthy and thriving. They wake me with kisses. They are loving brother and sister and they have futures. I believe all children are born citizens of the world, not possessions of their countries. Sacrificing a child’s life to promote an agenda is unconscionable. If someone is “selling babies,” crack down on them and put them in jail. Don’t pretend these isolated instances are the rule just so you can bend policy to reflect your philosophies. Understandably, our family does not donate to Unicef.

Children in the U.S. Need Champions

I am a social worker who has been working in the field of child welfare for 7 years. I can tell you that in New York State alone, there are hundreds of children in need of a loving home. If we are ready to talk so extensively about international adoption because of Madonna, why haven’t we chosen a celebrity who has chosen to adopt domestically and highlight him or her. There are so many children in this country who are abused, neglected or orphaned that need a stable home where they can heal from the chaos that has dominated their lives. We have champions for children oversees, where are the champions for all the adoptable children right in our back yard?

The argument that international adoption is cultural imperialism is the height of first world pretension and indulgence, almost bordering on racism and certainly conflating issues that are only tangentially related. It is the same sort of argument that opposes industrial development in the third world on the ground that cultures will be lost and families destroyed.

Meanwhile, children languish in institutions. This is bad for kids, a fact well-documented in the professional literature. I cannot see much harm to this social experiment, but surely it can be conducted without maligning people who chose to adopt.

A friend of mine is a single woman who wanted to adopt a child. She wasn’t looking for a baby, she just wanted a child under 6. Private U.S. adoption was out, public adoption was a nightmare, so she decided to adopt from Russia. Russia really does have orphans, and those raised in orphanages face a very bleak life. So she found an agency, saved up $30,000 for the adoption costs and learned Russian. Nine months later, after the home study was completed, the agency said the costs would be closer to $40,000, plus the cost of a doctor to consult referrals in the country. Travel costs to Moscow could be over a grand a night for 2-3 weeks.

Eventually, my friend decided the nearly $50,000 she’d saved for her adoption would be better used educating her children. She spend $600 on a vial of sperm from a sperm bank and she now has healthy twins.

At some point, the experts have to realize, if you make adoption such a nightmare to protect the children, there will be no parents to adopt them. Working single women don’t have the time to deal with the foster care system. International adoption could be a good alternative, but if they make it as bad as domestic, why will anyone bother?

Inside View of the System

I was adopted as an older child from Korea (the veritable birthplace of international adoption for North Americans) to a Caucasian family. I think it is far too easy to paint in broad strokes about the issues.

People have spoken about the motives of adoptive parents with wealth enough to buy a child from another country. My parents are blue-collar and struggled to make ends meet every day. They chose international adoption and an older child because, in their words, there were so many children already in this world. Domestic adoption had long waits and a lot of red tape. International adoption was more expensive because they had to sponsor me for years and hire two attorneys for each country. International wasn’t easier, it just made more sense for them and their situation.

I understand the heart-breaking stories about the greed motive that tears children away from their families. I do think, however, that we need to separate the issues from the people. Yes, the desire to adopt children creates the demand, but it does no good to vilify each individual who does want to adopt.

Posted via email from wholefamilyjoy's posterous